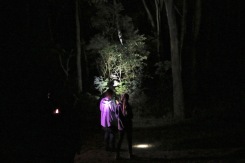 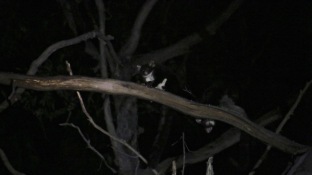 Last week I visited the Wombat State Forest near Trentham, Victoria. I was meeting with representatives of Biolinks Alliance and Wombat Forestcare for some networking and in an effort to locate some of the forest’s vulnerable Greater Glider population. I haven’t managed to see one in the Strathbogie Forest to date, so I was keeping my expectations in check.

The Australian Government Department of Environment and Energy (now there’s a telling oxymoron) lists this species as threatened and requiring a Recovery Plan. It also reports there is no Recovery Plan and that no Threat Abatement Plan exists either. The Victorian Government actively supports logging in the area that has the highest concentration of Greater Gliders remaining in the state – the Strathbogie Forest. Wombat State Forest has not been logged for 12 years.

Here I was, a couple of hours from home, looking for creatures that were meant to be in my own backyard. However, this time I was guided by experts instead of bumbling around by myself. It paid off as you can see. We not only saw eight Greater Gliders between 8.30 and 11pm, but we also saw a baby in its pouch with a pair of apparently doting parents and one creature make a flying leap. It was pretty cool!

Greater Gliders are a nocturnal marsupial related to the ringtail possum. That being said, they do not have a gripping ringtail, but a luxuriously furred, elongated tail used as a rudder and for balance. They sleep in various hollows during the day. Like a koala, they only eat eucalyptus. About the size of a cat, they make quite an impression when seen in the wild. Their gliding membranes stretch from elbows to above their feet. Impressively, they can glide up to one hundred metres!

What else did I learn on the night? Greater Gliders are generally solitary. It is unusual to see two together. We were as fortunate to see a family together, as we were with the still and warm night. These delightful animals are now largely restricted to some wet gullies of the Wombat State Forest where candlebarks provide hollows for refuge. The number of trees and therefore hollows is limited, so the population is limited. The Wombat State Forest is part of a fragmented habitat. The capacity of this population migrate during poor seasons and to diversify and strengthen its gene pool is limited.  These creatures are clumsy on the ground and highly vulnerable to introduced predators such as foxes and cats.

Finally, I learnt that there is a plan to do a fuel reduction burn in the very area we were visiting. My observation was that the fuel load was in fact pretty low. I would also make the observation that there is no excuse for deliberately burning a specifc threatened species habitat zone such as this. Members of Wombat Forestcare were marking some of the trees we could see had nesting hollows with flagging ribbon so they might be protected. However, these trees represented a tiny fraction of the ones that won’t be marked as providing homes for these vulnerable animals.

Note: I am responsible for all photos except 1 & 7, which were taken by another visitor.

2 thoughts on “A Night with Greater Gliders”