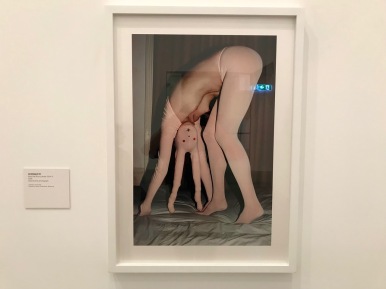 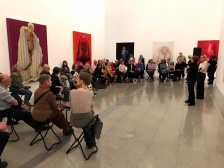 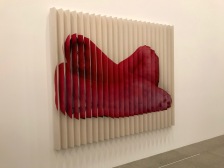 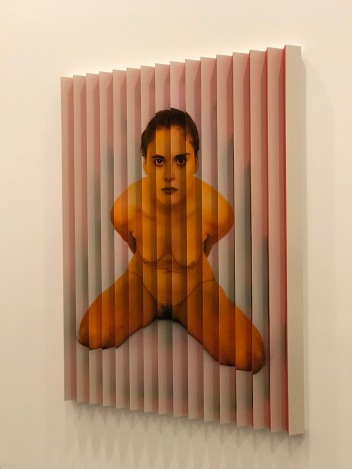 Despite never having been introduced. Despite not knowing much about her. Visiting Polly Borland was pretty personal really. It is not as if we actually spoke to each other. I mean she spoke, we just listened. But, listening was good. Because that is how we got to know her better. It certainly was a path to understanding her work. Important, because I didn’t get it at all at first.

When we arrived at her front door, we were meant to be checked in by security. The Security Guy took one look at me and immediately said, “Members Only!” with a look as if to add, “Nothing to see here that would interest the likes of you.”

“Jeez”, I wondered, “Don’t I look like a Member? What exactly is wrong? Is it the flannelette shirt and the Blunnies? Do I look like a dick instead of a Member? Standing slack out the front here while all the important Members are already inside, upstanding and erect, positively cocky. Absolutely ready to ejaculate an opinion or indiscriminately spray other Members with genetically superior explanations.

To spare myself the embarrassment it may have been better if I had the bit of paper out of my pocket and made sure I had the barcode facing up as I approached the door. I dug deep, I fumbled, I withdrew my hand from the abyss like depths of my pocket. Enclosed in it, a ball a crumpled paper. “Mate”, I said, “Mate, lend me your back so we can smooth things out right here and now. I’ll show you who’s a Member!”

It worked. The wrinkled barcode gave up its personal data to the ever-seeking laser reader. My details were extracted and stored for the purpose of future harassment and a light went on behind the eyes of the AI simulacrum of a human being previously programmed to intimidate and refuse entry. There was an immediate full face change of expression just like when those clever bastards you see on TV run their hand down their face and go from grim to all light and airy in an instant. It retrieved a welcoming smile from random access memory. There was even a slight bow as the arm went out and the hand indicated, “This way please.”

We were in like Flynn! Rubbing shoulders with the corps d’elite. Comparing knowing murmured notes with the art world critics. Cracking the make-up pancake with a witty quip here and there. Flapping the flannelette as we brushed up against the clothes horse drapery that could have been a canvas hanging on any Toorak wall. Making informed commentary alongside the GP’s wife (or possibly even one step up, the surgeon’s wife). Acknowledging everyone we didn’t know with a subtle nod that sent them spiralling down into hell’s underworld of social confusion. “Should I know that person?” Pretending our miscreant hair was intentionally stylish and repeatedly putting our weight on one foot, our chin in cupped hand, our heads on a studious tilt and wondering wtf we were looking at?

Polly’s work is so often ugly. I mean ugly. Nothing personal Poll. Talented? I was guessing so, considering all the fuss, but ….. We wandered into the vestibule. An inexplicable panty hosed bunny stuffed with cotton balls hung off a naked actress who Polly had inverted inside a plain picture frame.

As we headed through the first passageway, grotesque ogres manifested themselves. A transvestite Nick Cave had his oversized nostrils scrunched and contorted by robber tight panty hose under a blue bonnet wig and stretched over his ruby red lips. A brown woolly headed gollywog sent out the frighteners from behind the glass (it was like, I mean, everyone knows golly wogs are black, right?).

Then there was a room full of nylon stuffed obscene human obesities and concertina images to be viewed from left, right and fore. Obscure tapestries in reverse crafted by the expert hands of rehabilitating convicted criminals balanced on cuboidal plinths of pallor. That’s the works, not the crims! Their reworking of Polly supplied analogue images cranked for colour, lose nothing, but change everything. And don’t get me started about the controversy surrounding Polly using her son as a model.

The room where we finally met Polly housed gargantuan images of stunning contrasts. Concertina canvases represented beauty in the form a young woman, lithe, naked and full of psychotherapy from one side, then her body stuffed into a hideous pupae like oversized XXXXXXLS stocking on the other. Viewed from front on, the split image threw out the challenge of, “What is it you are actually looking for?” Like that question applies to everything in life, right? And here it was jumping right at you out of the wall, working on you in the most perplexing of ways.

Then, Polly talked. She talked about her traumatic move to LA. How you can’t tell the truth in LA. How wounding the place and culture were for her and her son. She sees herself as an explorer, here to speak, to show something beyond the temptation of self-censorship. She says the work has darkness, but it is also transcendental because she is a humanist who sees her work as existential, who is concerned with symmetry and balance.

After Polly had finished I approached the next space with renewed interest. How would it all sit with me after hearing the artist? Was I enlightened, more sympathetic, better informed, able to achieve greater depths of scrutiny?

As the exhibition progressed, the images scaled up to gigantic, the second skinned models became more texture and volume than human, the palettes richly contrasting, more striking, even pleasing, as opposed to the monstrous figures they decorated. As Polly herself said, there is something sinister here.

Since Polly’s human body packed series are given titles such as “pupa” and “morph”, they appear to be suggesting anthropomorphic intent. But despite the intentional shape shifting, my perspective created a mindfulness of concurrent entrapment and resignation. Usually accompanied by hideousness, this stasis was balanced with only rare examples of underlying or emergent beauty. This made for a confronting experience. A what is art experience? Hearing Polly speak was informative and insightful. While it helped me admire her achievement, I still found many of the pieces to challenging for my culturally sculpted pleasure centres to enjoy.